Caroline Spector is the latest blogger on the Wild Cards website, with a tribute to Hoodoo Mama wherein she blames me for… well, everything.

Check it out at http://www.wildcardsworld.com/

It has zombies. Everyone loves zombies.

(FWIW, Hoodoo Mama is my own pick for “My Favorite Wild Cards Character That I Created But Have Never Gotten to Write Myself”). 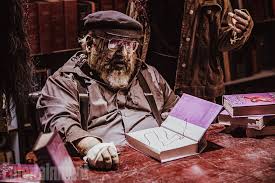 Here’s some cool news for the fans of my Thousand Worlds stories… y’know, the science fiction that I wrote way back when, long before I thought of GAME OF THRONES.

The SyFy Channel has just greenlit the pilot for a proposed NIGHTFLYERS series, based on my 1980 Hugo-losing novella, one of my SF/ horror hybrids.

Details can be found here (and in lots of other places on the web):

Since I’m exclusive to HBO, I can’t be part of the NIGHTFLYERS development, but I wish them well. The novella was a favorite of mine (especially the longer version that I did for BINARY STARS), and I think the show could have a lot of potential… especially if you like a little horror in your SF.

If it looks as good as THE EXPANSE, by my pal Jimmy Corey…

(That pic up above is me and Parris at Denvention II, by the way, the night that “Nightflyers” lost the Hugo to Gordy Dickson).

Some Odds, Some Ends

Had a great visit with Walter Jon Williams and his Toolbox students up in Angel Fire. It’s a lovely drive from Santa Fe, and it was nice to meet (however briefly) the fledgling writers. How many of them will actually go on to make it, well, one can never be sure of that, but I shared what wisdom I could from my years in the field, and showed them a few of my scars as well. They have some good teachers in Nancy Kress and Walter Jon. As I mentioned to the class, I workshopped with WJW for years, and he was right almost 75% of the time. 🙂

Back at the homestead, we’re facing a certain amount of disruption. Santa Fe is a lovely town and one of its charms is its pueblo style architecture… but be warned, those damned flat roofs will LEAK, don’t let anyone tell you any different. My office roof has been leaking off and on for years, and has been patched and repaired at least a dozen times since I’ve been here… to the point that my contractor finally threw up his hands and said he couldn’t keep putting patches on the patches on the patches. I need a whole new roof. And since that process requires me to vacate the premises, I figured this is the perfect opportunity to do some of the renovations I’ve been planning (and putting off) for the better part of the decade. So, bottom line, I’m moving to new workspace, while the old workspace gets a new roof and some cool additions. But I should be settled in at the new place within a week or so.

Also have the big trip coming up. I cut way way way back to my travel this year, to give myself more time to work. Back in April/May I did Stokercon on the Queen Mary and the benefit for Clarion, but come August I’ll be off again, first to NYC for a wedding and the usual round of publisher and agent meetings, then off to Finland for worldcon, then on to Russia for a con in St. Petersberg. I have been to Finland twice before, but this will be my first time in Russia… though I know I have a lot of Russian fans from the emails I receive. It will be nice to meet them. Two trips for all of 2017 is the least amount of travel I’ve done in twenty years.

LOTS of things going on with television and film. Season 7 of GAME OF THRONES will be here on July 16 (and we’re doing a season 6 marathon at the JCC), the five successor shows are moving forward at various rates of speed, and we’re talking with UCP about not one, not two, but three possible Wild Cards series. And there are a couple other TV projects that I can’t tell you about… how much of this will come to pass, nobody knows. Ah, the joys of development…

Oh, and football will be starting soon. Don’t ask me to explain what the Jets are doing. I don’t understand it either. I foresee a very painful season for fans of Gang Green. But hey, what’s different about that?

HBO’s latest trailer for season 7 of GAME OF THRONES is here.

And for those in New Mexico, we’ll be screening a season 6 marathon at the Jean Cocteau before the season 7 premiere. Check the JCC website for dates and details. Admission is FREE.

Off to Angel Fire

Been a while since I posted here, I see. That doesn’t mean nothing is happening. Quite the contrary; it means lots of things are happening, and I’ve been way too busy to worry about my Not A Blog.

Today will be a pleasant interlude. I’m taking the Tesla up north to talk to the students at Walter Jon Williams’ Taos Toolbox workshop… which no longer seems to be in Taos, but further north in Angel Fire. But it’s a beautiful day and it should be a beautiful drive, and I always relish the opportunity to corrupt some young minds. 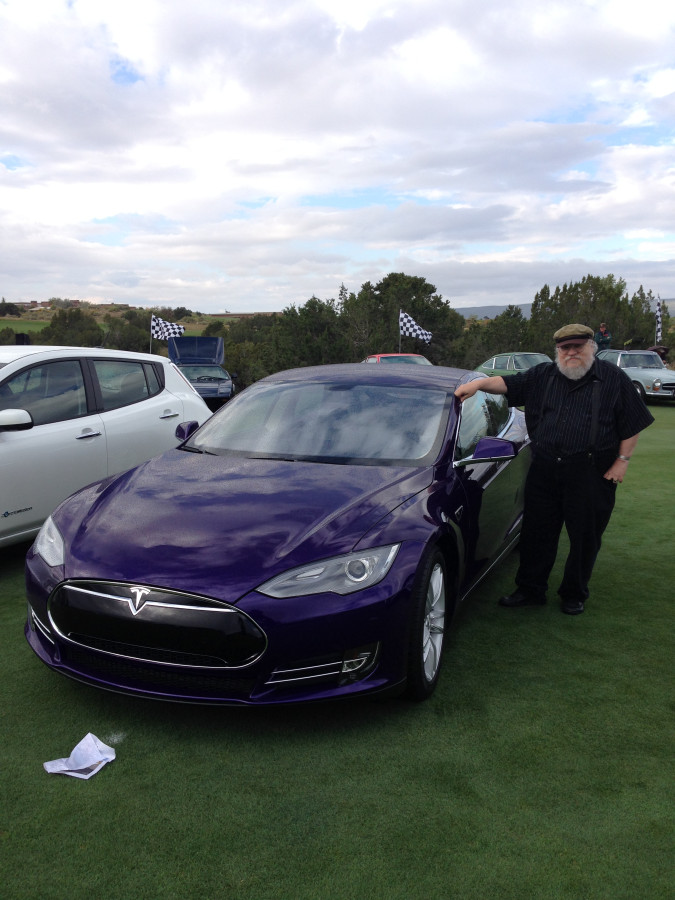 Something Old, Something New…

… or rather, the old becomes new again tomorrow, when Tor releases the latest volume in their series of Wild Cards reissues: DEAD MAN’S HAND, the seventh book in the original sequence.

I’ve had some readers complain about my name being featured on the covers of the Wild Cards books because I “didn’t write them.” That’s a bullshit complaint, IMSHO. No, I am not the sole author of the Wild Cards stories, I am only one of… ah, lemme see, I believe it was forty-one writers at last count.

I am, however, the editor of every single one of the twenty-three volumes published to date, and the new ones in the pipeline as well… the guy who recruits all those writers, determines the ‘overplots’ of the triads, solicits proposals, accepts and rejects, and gives extensive notes on rewrites. (And there’s a LOT of rewriting in Wild Cards, to make all the bits fit together so the whole will be more than the sum of its parts). It’s a lot more work than any other sort of anthology, believe me… though I love it, so I don’t complain… too much. I earn those credits, and to suggest that my name is just being ‘slapped on’ the covers while someone else does the work is as ignorant as it is offensive.

Besides which, I DO write for Wild Cards, in addition to editing the series. More so in the early days, admittedly, before Westeros and Ice & Fire arose to eat up almost all of my writing time. Truth be told, I’d love nothing better than to write some more Wild Cards stories. I have some old favorite characters I’d love to revisit (Popinjay, the Turtle), and some newer characters that I’ve hardly written about at all (Lohengrin, Hoodoo Mama)… and I have stories to tell. But all that will need to wait until I’ve finished WINDS OF WINTER, and maybe DREAM OF SPRING as well.

Which brings me back to DEAD MAN’S HAND.

If you’re one of those who hasn’t tried Wild Cards because there’s not enough of my own writing in it, well, here’s your chance to hop in. Because this volume has LOTS of my own writing. The typical Wild Cards mosaic novel features work by half a dozen or more writers and as many characters, but on this outing there were only two of us. DEAD MAN’S HAND is a sort of noir mystery novel, as two very different detectives attempt to unravel a grotesque murder in Jokertown. The stars are Yeoman, the ace of spades vigilante, written by John Jos. Miller… and my very own Popinjay, Jay Ackroyd, a rumpled private eye and projecting teleport.

The Tor reissue has a great new cover from Michael Komarck as well.

The Wild Cards reread continues over at Tor.com, with an insightful new post by Katie Rask about the many various styles of art in JOKERS WILD, and the meanings behind all of it.

Last weekend Parris and I drove up to Denver to attend the memorial service for our friend Ed Bryant, who died in February.

It was a long drive and a sad occasion, but I’m glad we went. It’s still hard to believe that Ed is gone. The last time I saw him was in November, in Tucson, when he was toastmaster and I was guest of honor at Tuscon. The first time… that must have been ’73 or ’74, as best as I can recall, at Harlan Ellison’s house in Sherman Oaks. A lot of years, a lot of cons.

Connie Willis emceed the event, eliciting both laughter and tears from the large crowd that had gathered to say farewell, most of them in Hawaiian shirts and baseball caps.

Many others rose to speak as well, including me. Ed left a lot of friends.

Ed was a talented writer and a great workshopper, who mentored and encouraged many writers younger than himself and helped them on their way. He was one of my Wild Cards authors, creator of Sewer Jack and Wyungare. But most of all he was a sweet, kind man, with a warm smile and a gentle wit. Science fiction and fantasy will be poorer without him.

Memorials like this are not for the deceased so much as they are for those left behind, I believe. It was good to get together with so many others who cared about Ed, and to share our memories of him, with laughter and love.

A new post went up today on the Wild Cards blog, the latest installment in our series, “My Favorite Wild Cards Character (That I Did Not Create).”

This time it’s Melinda Snodgrass, singing the praises of Wally Gunderson, better known as Rustbelt. Check it out at http://www.wildcardsworld.com/my-favorite-wild-cards-character-that-i-didnt-create-2/

Wild Cards fans, sound off… who is your favorite character from the series?